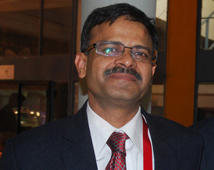 Dr. Sanjay Kumar Bhadada (MD, DM (Endocrinology and Metabolism), FICP, FRCPI and MNAMS) is working as an Additional Professor in the department of Endocrinology, PGIMER, Chandigarh, premier medical institute of country, known for its research and patient care worldwide . He is the founder and current secretary of Punjab and Chandigarh chapter of RSSDI. He is an Ex National Executive and current Secretary of Indian Society for Bone and Mineral Research (ISBMR). He is the regular speaker at annual conferences of RSSDI, Endocrine society of India (ESI) and ISBMR. He has more than 160 publications in high impact factor journals, speaks about his research aptitude. He has received prestigious awards like M N Sen Oration award by ICMR in 2013, PN Shah Oration award by Endocrine Society of India in 2010 & Prof. Survir Singh Visiting Professorship by Association of Physicians of India in 2011. He also delivered Sanofi Aventis senior lecturership at APICON and recently nominated for prestigious Prof. Shuvir singh oration award. He has research collaboration with International institutes like Henry Ford Hospital, Detroit, USA & Antwerep University, Belzium and national institutes like IIT Ropar, CDRI Lucknow, AIIMS New Delhi, Panjab University & IMTECH, Chandigarh. He is the Section Editor of the ESI manual of Endocrinology. His major field of interests is diabetes in young and bone and diabetes. He is core team member of simultaneous pancreas and kidney transplant program at PGIMER, Chandigarh. He was the organizing secretary of one of the best organized ESICON (year 2014) at PGIMER, Chandigarh.

His work on primary hyperparathyroidism (PHPT) is recognized throughout country. He made the first online Indian PHPT registry program (www.indianphptregistry.com) to compile the data on PHPT throughout Indiato better understand the epidemiology, clinical and biochemical aspects in PHPT from India and has published many papers on the different clinical and biochemical complications associated with PHPT.

He is also actively involved ineducating type 1 diabetes children and providing complementary insulin and glucostrips to poor and underprivileged young individuals with diabetes through social support groupcalled ADITI (Association of Diabetes (young) in Tricity ). He is founder and current secretary of ADITI.

PUBLICATIONS (Journal Articles - Only on PHPT)